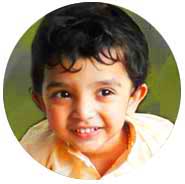 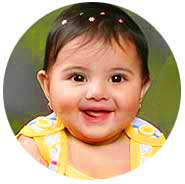 Tamil / தமிழ், also spelt Tamizh is a South Indian language spoken predominantly by Tamil people of Tamil Nadu and Sri Lanka. It has official status in the Indian state of Tamil Nadu and the Indian Union Territory of Puducherry or Pondicherry. Tamil is also an official and national language of Sri Lanka and one of the official languages of Singapore. It is legalised as one of the languages of medium of education in Malaysia also.

According to Hindu Mythology, Tamil language was created by Shiva. Shiva's other Son, Lord Murugan also known as Lord Kartikeya and the sage Agastya brought it to people.

Since Tamil is widely spoken language across the world due to the immigrant population, and also the fact that many people learn the language due to its popularity, Tamil baby names are very popular. Pure Tamil names have very good inner meanings and also are very sweet sounding. Please visit our Tamil boy baby names and Tamil girl baby names and also contribute to the list by mailing to [email protected]